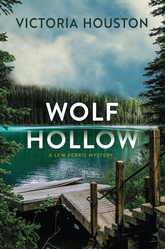 It's mid-May in Loon Lake, and the fish are biting. Walleye's not the only thing on the hook. There are rumors that a precious vein of nickel and copper is buried on the property of wealthy Grace McDonough, and the drilling is about to begin. But not if environmentalist Pete Ferris can help it.

When Grace's 24-year-old son, Noah, is caught in a sordid sex crime, police chief Lew Ferris makes the arrest. But a day later, Lew is stricken when her brother Pete turns up dead. Then, Grace's body is discovered in a car at the bottom of a river—and Noah has vanished. Lew puts out a statewide APB, but before long, Noah is also found murdered. It's beginning to look like mother and son were killed by the same person.

“Wolf Hollow draws you in like a trout to a perfectly cast fly. Victoria Houston is a master storyteller.”—Marc Cameron