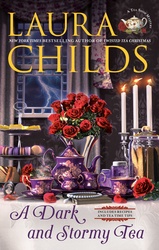 A Dark and Stormy Tea

A deadly storm a brewin

It was a dark and stormy night, but that was the least of Theodosia Browning's troubles. As she approaches St. Philips Graveyard, Theodosia sees two figures locked in a strange embrace. Theodosia quickly realizes she has just witnessed a brutal murder and sees a figure slip away into the fog.   In the throes of alerting police, Theodosia recognizes the victim--it is the daughter of her friend, Lois, who owns the Antiquarian Bookshop.   Even though this appears to be the work of a serial killer who is stalking the back alleys of Charleston, Lois begs Theodosia for help. Against the advice of her boyfriend, Detective Pete Riley, and Drayton, her tea sommelier, amateur-sleuth Theodosia launches her own shadow investigation.

“A delight for mystery mavens and foodies, with Charleston providing the suitably spooky background.”—Kirkus Reviews