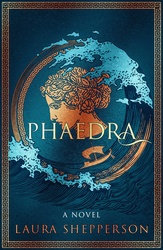 Phaedra has been cast to the side all her life: daughter of an adulteress, sister of a monster, and now unwilling bride to the much-older, power-hungry Theseus. Young, naïve, and idealistic, she has accepted her lot in life, resigned to existing under the sinister weight of Theseus’s control and the constant watchful eye of her handsome stepson Hippolytus.   When supposedly pious Hippolytus assaults her, Phaedra’s world is darkened in the face of untouchable, prideful power. In the face of injustice, Phaedra refuses to remain quiet any longer: such an awful truth demands to be brought to light. When Phaedra publicly accuses Hippolytus of rape, she sparks an overdue reckoning.   There are two sides to every story.

“Shepperson shines in her debut . . . This inspired feminist retelling will captivate readers.”—Publishers Weekly