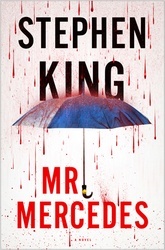 eBooks are for members only

To purchase the eBook of this title, please log in or join now.

Brady Hartsfield is hell on wheels

As hundreds of unemployed workers wait in line in the frigid pre-dawn hours to secure a spot at a job fair, a lone driver plows through the crowd in a stolen Mercedes, backs up and plows through again. Eight people are killed, 15 are injured. The driver...the killer...escapes.Months later, retired cop Bill Hodges is still haunted by the unsolved crime. When he receives a letter from someone claiming to be the driver-and promising an even more diabolical attack-he's hell-bent on preventing another tragedy.Brady Hartsfield loved the feel of death under the wheels of the Mercedes, and he wants that rush again. If someone is going to stop him, they'd better hurry because Brady's next deed, if he has his way, will kill or maim thousands.

"Classic Stephen King. Creepy, yet realistic characters that get under your skin and stay there, a compelling story that twists and turns at breakneck speed, and delightful prose that, once again, proves that one of America's greatest natural storytellers is also one of its finest writers."-Associated Press